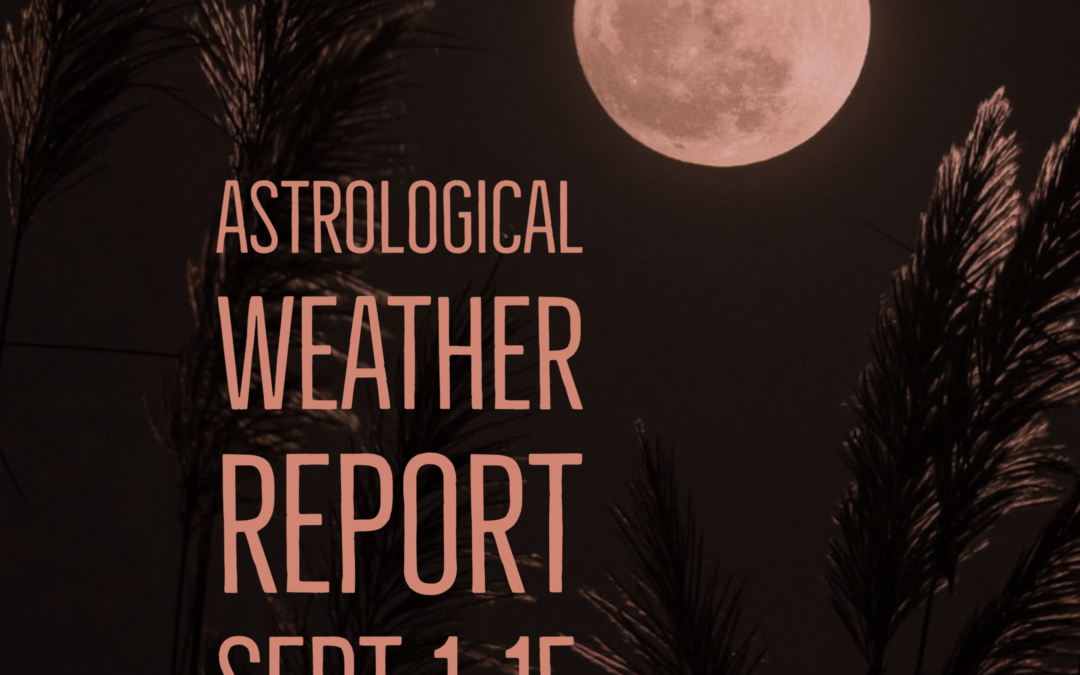 We hit the ground running in September with the Full Moon on the 1st. The Moon moves into Pisces early in the morning and then the Full Moon happens late that evening. We have some major Venus action over these two weeks too. Lastly, the Moon moves around the zodiac and lights up all the major players in the sky right now.

Pisces Full Moon late at night (east coasters early on the 2nd). The Full Moon kisses Neptune in Pisces to boot. These could be a great couple of days to dream, to vision, to really lean into getting clarity around where you want yourself and the world to go. Do a Full Moon ceremony focusing on whatever needs to be released from you realizing your visions and dreams. Connect into Spirit and the Cosmos with Neptune and the Moon together paves the way. Tune into your dreams over these days and allow your subconscious to speak to you and show you the path.

On the 2nd, Venus is opposite Saturn, concluding Venus’ recent connections with the 2020 Big 3: the alignment of Saturn, Pluto and Jupiter. Reminder: the Big 3 are mirroring our personal and collective intent to feel into what structures in our society need a major overhaul, a composting and renewal. Venus getting into the mix, by opposing the Big 3, allows the Divine Feminine to add her juicy touch to creating what really works for us. I see this as more of the Feminine opposing the patriarchal system that isn’t serving any of us. No matter which issues you see need changing, turning our collective power over to the Masculine for thousands of years is at the root of them.

The Moon gets close to or opposes a bunch of planets over these days, lighting up their intent. The Moon amplifies whatever it conjuncts, opposes or squares – meaning is within 0, 180 or 90 degrees away from in the sky. These are called dynamic aspects or relationships that inspire an opportunity to rise up to the energies they are mirroring for all of us. Dynamic aspects show an intent or a teaching related to the planets involved. When it’s the Moon in one of these relationships, which happens every month because the Moon moves so quickly through the sky each month, it is amplifying or adding some extra juice to the planets it’s connecting with. It shows an added intention to check in with those energies. That is why doing ceremonies around the Moon cycles are so powerful in helping us be conscious of the natural cycles and energies around us all the time, whether we’re tuning into them or not.

Over these days, the Moon amplifies Mercury, Chiron, Saturn, Pluto, Saturn, Uranus and Mars. That’s quite a line up! On the 3rd, it’s Mercury’s turn. Mercury is in Virgo, so the Moon is illuminating our collective intent to think with mind of an earth priestess. Virgo sees the pattern of the earth’s cycles and serves Spirit by helping us all to hold the earth in a sacred space in our minds. This follows nicely on the heels of Venus opposition to Saturn on the 2nd, by bringing our thinking deeper into the sacred feminine earth expression.

On the 4th Venus is square Mars and visa versa. Venus is in Cancer, the archetypal mother who nurtures us and makes a safe space for us to grow into our best selves. That energy is square (90 degrees away from) Mars in Aries, the archetypal warrior, protecting and defending. The question is what is Mars defending? The emerging feminine power or the excess masculine power? Is it defending what needs to change to put us all on equal footing – black and white, male and female, rich and poor? Or is it protecting the status quo? It’s a “squaring” off between the two most accepted archetypes for women and men – the mother and the warrior. Interesting huh? Especially in light of the Big 3 showing us an intent to change by taking a deep, deep look at what isn’t working in our world.

Also on the 4th is the Moon close to Chiron – all in Aries. Chiron shows where our fracture points are, where our wounding is. It points to what needs healing most. So, here we are in Aries having the Moon illuminate the Aries wounding, the stuck place of fighting for what isn’t right in our world, protecting the status quo.

The 5th and 6th have the Moon squaring the Big 3: Saturn, Pluto and Jupiter, as well as Venus and also travelling with Mars and Uranus. That’s a lot getting amplified! I see the theme of these two weeks really having to do with the Big 3… again! No big surprise there as this is the name of the 2020 game. It’s a time to recreate our world, both personally and collectively. This isn’t an overnight process, but it’s a time to keep seeding our vision of what we want to be a part of going forward. I see this in how people are responding to the pandemic and all the loud calls for social justice. I hear people wanting to do better by themselves and others. I hear frequently how the quarantine has allowed people to connect into what is most important to them. People want to continue having more time to simply “be” and not “do” all the time. That is a pendulum swing from Masculine output of energy into the Feminine being and stillness. I keep saying it, but I feel the Big 3 show an intent for us to look at the biggest structure of our times, patriarchy and bring back the Feminine. The Moon lighting up all these planets that are so intricately involved in this toss up further illuminates what I’m writing here. I’ve written plenty about the Big 3, Venus and Mars, so I’ll just speak finally to the Uranus piece. Uranus surprises us and asks us to be different, to shake up what we’re doing and take the path less traveled. Let’s heed it’s call!

The Sun is opposite Neptune and brings the Sun’s light to our dreams and visions. This is similar to the Moon with Neptune, but on a brighter scale, like the Sun brighter. How do we connect to the mystical through our subconscious and dream and vision into our future? I find it interesting this is happening on September 11th. Neptune reflects our empathy and compassion as we merge with the Divinity of the Sun to feel our deepest power and use our creativity to create something better for everyone.

Jupiter goes direct, ending it’s long retrograde cycle. We start to move forward after this long exploration into what we want to expand, what’s been working, in our world. We can start taking action towards what we want to create.

Venus aligns with the crescent Moon symbolizing Venus passing into the Throat Chakra gate within the ancient mythology around Venus. We are inspired to remove what blocks our voices! Hallelujah!

Venus squares Uranus. Let’s use these new found deeper expressions of our voices to sing into something different for the Feminine! This whole 19-month Venus cycle is led by the overtone of Gemini, the sign that plays with our minds until we see there is unity beyond polarity. I’d love to see us find a path beyond the intense duality we see these days and move towards something we can all get behind, together.

Like all of this year, I think essences that keep us grounded are extremely helpful. All of the Firs are nice Feminine energetic grounding trees. I’ve been using a lot of Fir Siberian Silver lately. It literally smells Divine! It also helps with anxiety and de-stressing.  Essences that support the Divine Feminine like Geranium and Rose are great for all this Venus and Mars energy. Also, plants that support Venus being at the throat chakra gate, helping us find our voices, are Laurel Leaf and Blue Cypress. You can shop for these and other essential oils by clicking here.