Dance of Venus and Mars 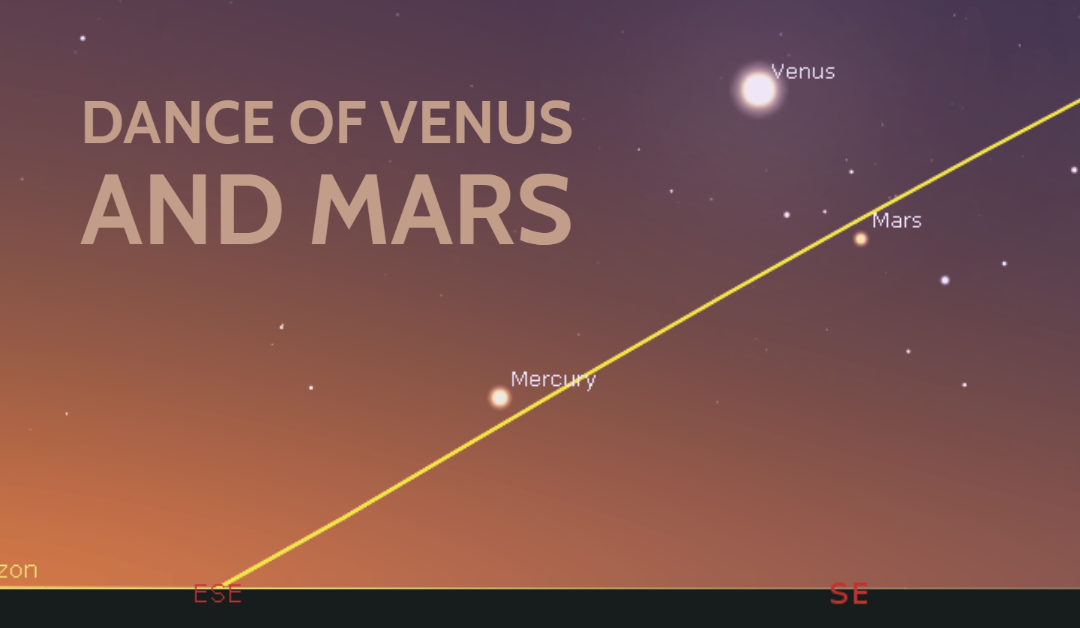 If you’ve been outside in the early morning recently, you’ve definitely seen Venus. If it’s been really early you may have seen Mars as well. I love the backdrop of Antares and Vega in a wide frame to this get-together. Perhaps, you’ve been blessed with a Mercury sighting too. It’s quite the lineup walking us into this Leo Full Moon, opposite our brilliant Aquarius Sun. We’re in the powerful cross-quarter time, signifying a lengthening of the Light for us northern hemisphereans and a deepening of the dark for those who reside in the southern half. Out of the stillness, or into the stillness, we go. How heavenly that our two Earthly halves mirror reflect each other. Simultaneously, we are graced to witness the Sacred Masculine and Feminine planets doing their dance in the morning sky. The seasoned Aries God is meeting the newly born Capricorn Goddess. Both are in Capricorn now but will be moving their slow encounter into the stellar rhythms of Aquarius soon. I love how this council of Venus and Mars begins in Capricorn and moves into Aquarius on the day of their next conjunction. What intentions are they reflecting for us at this time?

If Capricorn represents the Circle of Grandmothers, the wise ones who know how to live sustainably, smartly, correctly, then this gathering of the Masculine and Feminine principles in that archetype is our first clue. We are collectively striving to find union between these two energies within and without. Capricorn teaches us to work within the cycles of the Earth and to honor our Great Mother who feeds and nourishes us. We do this by loving on her, ourselves, and each other. That means EVERYONE. I’ve been thinking a lot about how the Gemini Venus cycle recently transformed into the Capricorn Venus cycle and what that’s teaching us. If Gemini is about moving beyond what the mind knows, beyond polarity and duality, then Capricorn comes in to show us how… for the sake of our survival. If we want to stick around, we have to unify, somehow, some way. Venus and Mars seem to be inviting us to do just that, find union between our Feminine and Masculine.

We all are clear on how the patriarchy hasn’t been healthy for any of us, male or female. Men are often misperceived as synonymous with patriarchy, taking all the heat. One could make a cogent argument for the damage patriarchy has waged on men. It’s undoubtedly been bad for women. We’ve all been in serious imbalance for thousands of years now. In some spiritual circles you’ll hear a call to swing back to matriarchy, for women to get control. But… shouldn’t our next step be no-archy? Isn’t it time to explore Gemini’s teaching to move beyond polarity? How about we try union and equality? Skip the rulership altogether. From the Shamanic Astrology perspective, aren’t we finally ready for the ultimate sacred marriage trip? That’s what Venus and Mars coming together demonstrates for me. Then, you throw in the Capricorn aspect of teaching us how to do things for the ultimate benefit of the community, especially those who aren’t even born yet, and it feels unmistakable that this is part of our current intention. (fingers crossed)

The Aries God gets a lot of the heat within the patriarchy – the military meathead, machine gun slung over his steroid-muscled shoulder, ready to blow down anyone in his path. Isn’t this Mars in Aries cycle helping us to compost this damaging stereotype of Aries and masculinity? His meeting with Venusian Capricorn feels like the Grandmothers and Grandfathers uniting to tell us what’s up and get us back on track. Sitting in council with Pluto confirms this desperate need for transforming our masculine and feminine into the empowered Sacred versions. How interesting the first Venus/Mars Capricornian conjunction occurs on this Full Moon on the Leo/Aquarius axis enlivening the themes of self-love and conscious awareness. We move into self-love through the union of all of our parts, through the sacred marriage, by honoring all of our creative aspects, and bringing this into our consciousness, into the light. The next exact conjunction occurs March 6, in Aquarius. Mars moves into Aquarius, followed minutes later by Venus and then the two meet exactly once again about 45 minutes after that, at the very beginning of Aquarius. First, we get some well-needed schooling by Capricorn and then we become conscious in Aquarius. That is my prayer for this Mars and Venus spin through the cosmos, both inside and out.

I love the Artemisia plants to support this union as these shrubs encourage us to find union between our Masculine and Feminine within. Leaders in the environment, the Artemisias literally lead the way and let us know an area is viable for us to live and set up shop. Mugwort is the most common Artemisia many know, but there is also Davana (known as Goddess in a bottle), Sweet Annie (Artemisia annua), Great Western Sagebrush, and Artemisia vulgaris – who helps us move from our minds into our hearts. If you’re struggling with making peace with one of these aspects within yourself or the world around you, try using an Artemisia, with intention, over these next several weeks, and see where it takes you.