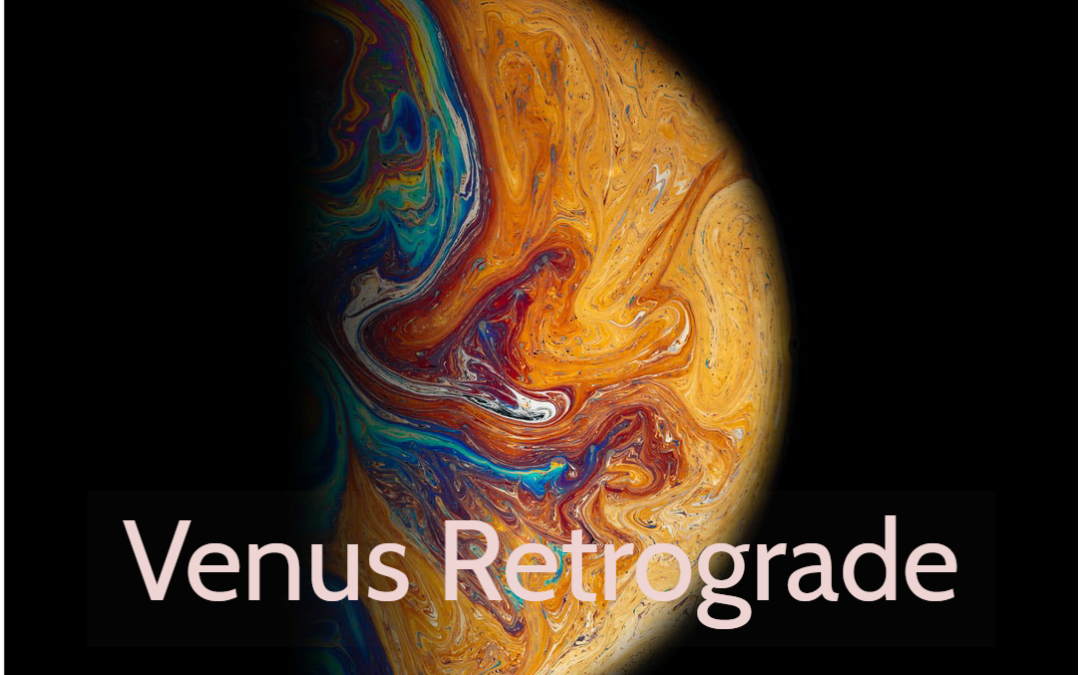 Venus went retrograde early this morning. What does that mean? Is that like Mercury retrograde? How could it affect you?

What does Venus retrograde mean?

Venus, of course, is still moving forward. She doesn’t stop and suddenly reverse course. Retrograde means that from our earthly view, she looks like she’s going backwards through the sky. Right now, Venus is the first star you see after the sunsets in the evening sky. Each night, now that she’s retrograde, she’ll look like she’s getting closer and closer to the setting sun, until finally around May 28, you won’t be able to see her at all. She’ll be hidden in the glare of the sun, which to ancient people meant Venus was going into underworld. It’s no surprise then that she begins this journey to the underworld by going retrograde first. Sounds scary doesn’t it? Especially in light of all the negative press Mercury retrograde gets.

Retrogrades get a bad rap. Mercury retrograde is the perfect scapegoat when things aren’t going how we like. Are retrogrades really that terrible? They’re not! Imagine you’re cruising down the freeway, and you overtake a car in the next lane. For a moment, you can see exactly what’s going on in that car. You can see the gap in the driver’s teeth as she smiles at you going by. That’s like retrograde. You get a moment, a period of time, to look more deeply at what’s going on. Time slows down and you’re encouraged to take a deeper dive into the teachings of that planet.

As Venus is the planet going retrograde, we get some time to explore the divine feminine principle. How delicious is that? How needed and welcomed is that these days? Yay for Venus going retrograde! What collectively needs our womanly attention? What could use a little female touch? What in your life needs a bit more emphasis on the feminine. Maybe a little more being instead of doing? I realize you’ve been cooped up at home, but have you been taking a time out or mostly stressing that you can’t “do” more?

What does Venus mean on your chart?

In Shamanic Astrology, Venus represents the energy of the feminine we came to learn about and explore – for women that is. As a woman, whatever sign Venus is in on your chart shows the type of feminine expression you’re here to study and embody. She’s part of this lifetime’s lesson plans for you. For example, if your Venus is in Taurus, you’re here to explore the physical beauty of the senses, of being in the body. On the other hand if your Venus is in Aquarius, you’re here to learn about consciousness and the mental realm, but in a cosmic kinda way. For a man, Venus represents your inner lover, the energy you initially seek outside of yourself, in a partner, or project onto potential partners. The secret is this is an energy you really need to find within yourself for true wholeness. If it’s Taurus, then you need to give yourself pleasure in your own body, or Aquarius then explore your own consciousness within yourself.

With Venus being retrograde, it’s a great time to dive into how Venus shows up for you personally. It’s this time where we all can look at the feminine collectively, as well as personally. Look at your birth chart. You can get a free chart by clicking here. What sign is your Venus in? That’s the version of feminine energy you came to learn about in this lifetime. There is no one, or right, way to be female. Learn about your intended expression. Now is a great time to take a deeper look, as Venus is the car you’re passing by on the freeway until June 25. You’re still stuck at home mostly, so what else do you have to do?!?

Go outside and check her out

In Shamanic Astrology, just like my focus on spiritual aromatherapy, the intention is to help us connect more to our indigenous roots, to open our perception and communion with the earth and sky around us. I invite you to go outside on the next clear night. Watch the sunset and then watch Venus come alive. She’s following behind the sun, so look for her a little bit above where the sun set, in the west. She’ll be the first “star” you see. Venus is extra bright right now. Feel connected to the sky and feel connected to your ancestors who worshipped her. The new Venus cycle starts June 9, when Venus rises in the morning sky, before the sun. She rises in Gemini, thus making the whole 19-month cycle have a Gemini overtone. We should be in store for some fun, playful, even trickster type energy, that is ultimately in service to helping us connect more deeply with Spirit.

Traditionally flowery feminine scents like Geranium, Rose and Wild Tansy are associated with Venus. But, I like to focus on the archetype your personal Venus is in more, to help you connect with that version of the feminine and support you in getting in touch with that specific energy. Here is one suggestion for each sign:

You can find these and other essential oils at the link below.