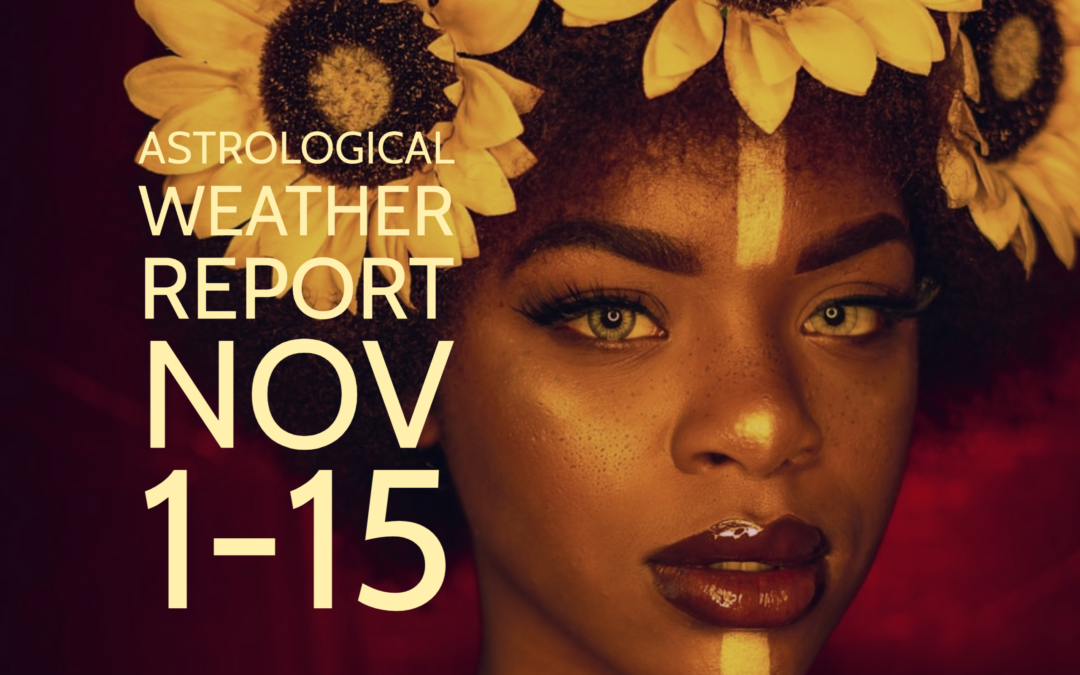 November begins still in the afterglow of the Taurus Full Moon on Halloween. Samhain, the ancient Celtic cross-quarter holy day, began at sundown on Halloween and continues through sunset on the first. If you weren’t able to do a ceremony to mark this special fall time of letting go and releasing something, there’s still time today! We are definitely in the witchy, underworld, Dark Goddess time of the year. Focus on looking at whatever is kept hidden in the shadows and surrender it. This frees up energy and creates space to be reborn anew in the coming months. Letting go and connecting to the feminine, womb energy of the earth is what these couple of weeks are all about.

Samhain ends at sunset, following the full moon in Taurus. Taurus is an earth sign, present in the body, enjoying what brings pleasure to the senses. Feel into your body and let go of anything that holds you back from the full embodiment of all your power. Venus in Libra is opposite Chiron in Aries. This is an opportunity to focus on releasing the wounding of the Divine Feminine. How does an Aries protectress help the Goddess know herself clearly and embody her fullest expression and power?

Mercury goes direct today, in Libra, beginning the new 3-month Mercury cycle with the overtone of Libra. I hope this day signals our coming back together, in more Libran consciousness, focused on seeing ourselves in each other, in equal relationships to our fellow citizens and the global world. That is my election day prayer.

Today is a great morning for some visual astrology. If you’re an early riser, go out early and look at the morning sky, before sunrise. This is so much of what Shamanic Astrology is really about. Finding our place in the world through connecting to the celestial and earthly cycles surrounding us. Before sunrise, look for Mars setting in the western sky. The plump gibbous moon is square Mars, so will be high in the sky. Venus is square the moon and opposite Mars, so will be in the eastern sky ahead of the sun. Look to see all three, spanning the sky, and feel what they inspire in you.

Mercury moves into Scorpio again, after retrograding into Libra temporarily. Our thinking moves again into the feeling function (still under that Libra overtone of conscious, equal partnerships). Feel into deeper connection and relationship with others. The moon is opposite the Big 3, our 2020 themed Saturn, Pluto and Jupiter conjunction. You can see Jupiter and Saturn moving closer to each other again in the evening sky. Pluto’s energy is resonate with Scorpio, so we’re still in the time of the underworld initiations and shadow work in order to heal ourselves and become more empowered.

The sun reaches 15 degrees Scorpio, marking the exact halfway point between the fall equinox and the winter solstice. The days are still growing darker, embraced in the Scorpio fall energy, as the earth moves towards gestation in the darkness of the year.

Look for the last quarter moon high in the sky at sunrise. Venus still in the east, ahead of the sun, and Mars in the west, setting.

Venus in Libra is opposite Mars in Aries, continuing our exploration into elevating both the Divine Feminine and Divine Masculine to equality and mutual respect. There is an excellent opportunity with these Venus and Mars cycles to move beyond polarity and protect what is right and works in the world, where we are all honored for our unique parts we play in the greater whole. I’m still focusing on our shifting away from patriarchy to something new that favors us all.

Venus and the moon come together, signifying the next Venus gate. At each of the seven Venus, moon conjunctions (during Venus’ journey through the morning sky) relates to her releasing something at each chakra on her descent into the underworld (when Venus is conjunct the sun). This gate is the solar plexus chakra. Time to look at and consciously release anything that blocks the healthy energy of your solar plexus chakra. Feeling this letting go theme yet?!?

Jupiter conjuncts (is close to) Pluto today as well, expanding the dark underworld intent of Pluto. This vibe of feeling into your darkness, whatever you hide, for composting and healing keeps on going. This is Jupiter’s last conjunction with Pluto, as we move towards the end of 2020 and the Big 3 will finally break up. Phew! There is so much support around doing this shadowy, deep feeling healing now. It’s time to go for it and milk the energy for all it’s worth! Whatever you clear out now, creates space for new seeds to grow into your truest self.

Mars goes direct, ending it’s retrograde cycle. Mars is still in Aries (the overtone for the full 2 year cycle) but now moving forward. Our repairing of Aries moves more quickly, with less slow moving, deep processing. Let’s keep our focus on this Aries Mars coming into it’s purer state of protecting the cosmic order where we all are equal and stand together, rather than being a senseless fighter for patriarchy and the status quo of the last several thousand years. It’s time to move on!

New Moon in Scorpio! More Scorpio, as the sun and moon come together. This happens late on the 14th in the Pacific, Mountain and Central time zones and early on the 15th in Eastern time. A Scorpio new moon is more of this same composting and healing through the darkness. It’s the shamanic death and rebirth new moon as well as that time of the year. How beautiful to consciously choose to let go and be reborn into more of our authentic selves, not held back by fears and hurts and hidden shame. Learn more about Scorpio and the new moon by joining me for my FREE online New Moon Ceremonial Class by clicking here.

I suggest essences that support journeying into the underworld to heal, such as Black Pine and Black Spruce. I’m also using Black Cade and Black Cardamom. These black essences are absolutely beautiful and help us to not fear ourselves and our healing journeys. They give us courage to do the same work the earth is doing now, preparing for winter, for the darkness. Getting ready to be still, like a seed, gestating in the womb of the Dark Goddess to have our shamanic rebirths, that come from healing ourselves through vulnerability and honesty. Don’t you want to free up energy you use to stay safe and protected from your full badass power? I do! You can shop for these and other essential oils by clicking here.