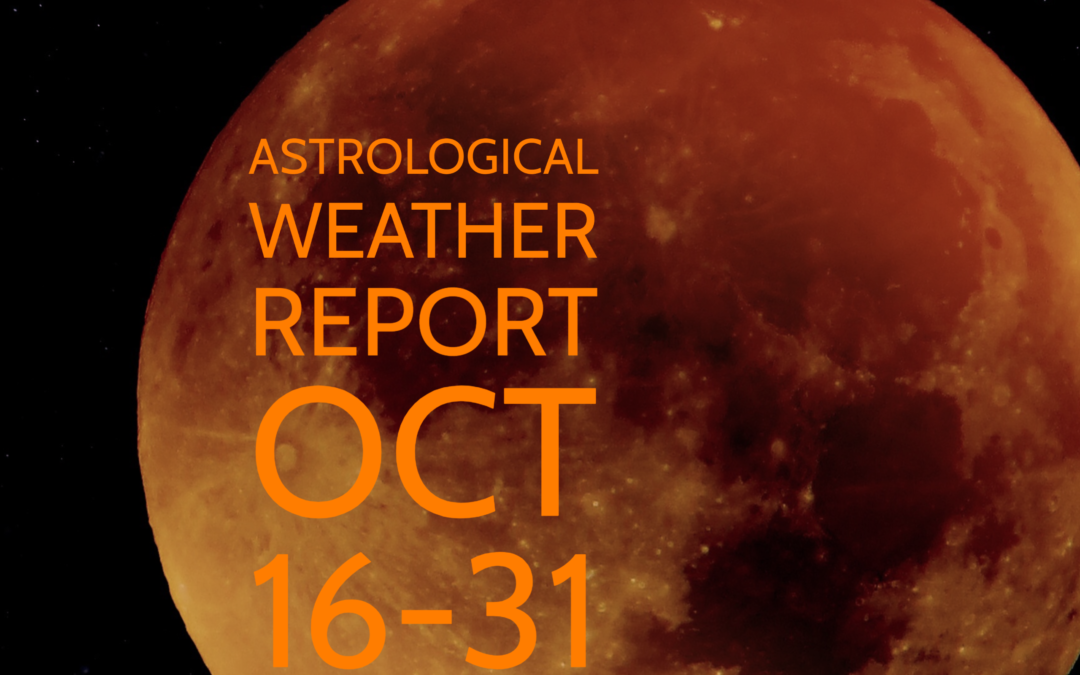 We bookend the rest of October with two Moon events – New Moon on the 16th and Full Moon on Halloween. What a perfect date for the Full Moon! Halloween is also the Celtic cross quarter holy day Samhain (pronounced saa-when) where we celebrate the Dark Goddess and the Underworld. This was the precursor to Halloween; same for the Christian All Hallows Eve. Cross quarter days mark the mid-points between the equinoxes and solstices. By the way, the Dark Goddess isn’t scary, bad or evil. She’s the representation of a completely natural part of life, this fall time, where things die off, the gold and red leaves decompose into black nutrients that nourish the earth and leads again to new life and rebirth. The Dark Goddess speaks to us of death that makes way for renewal. She’s the dark aspect of the Moon. She’s the crone aspect of the Goddess. We honor her to make way for our rebirth in the spring. We compost what no longer serves us.

We also have several celestial bodies changing signs (or archetypes) over these two weeks, meaning the energies are shifting. You can feel the changes in the fall season, moving towards winter and the dark time of the year for us in the northern hemisphere.

The Moon once again passes by all the planets in its monthly journey around the earth, thus activating each aspect of the sky. Of course, this includes the 2020 Big 3: Saturn, Pluto and Jupiter close together all year. You can see Jupiter and Saturn in the night sky, after sun set. Jupiter is the bright star that comes out first as the dark emerges, with Saturn close by to the left.

This Moon and Sun are together in Libra today, opposite Mars in Aries and square (90 degrees from) the Big 3. That’s some activation today! The New Moon is an excellent time to set an intention, plant a seed for this coming month-long Moon cycle. Libra is a sign that discovers itself through its relationships and interactions with other people. It sees itself and can define itself through the mirror reflection that others provide for it. Libra seeks conscious, equal partnerships where accurate reflections show it who it really is. With Mars and the Big 3 in the mix, we have an incredible time to set those intentions for what you really want to see birthed into the world in the coming months and years.

Mars just started its new two year cycle in the overtone of Aries, showing an intent for us to raise the Divine Masculine to new heights within the Aries archetype. Mars will go through all the signs over these two years, but the cycle began while Mars was in Aries, so that is the overtone to the entire cycle. Aries is a sign that needs to go to new heights as well, moving from the warrior fighting for the patriarchal status quo to being the warrior protector of the cosmic order of equality, defending what is right and serves us all.

The Big 3 show us the intent behind everything we are experiencing this year: the pandemic, protesting racism, the election, and increasing climate events like fires and hurricanes. Saturn offers an opportunity to shed what isn’t serving us, like racism and climate change denial and embrace what is serving us. Pluto provides an opportunity to do that through a deep, internal, emotional, composting of feeling into what isn’t working and isn’t right in our world. Jupiter simply pours gas on the fire of the other two, demonstrating an intent for intensity to make our work undeniable and inescapable. I’d say the pandemic has provided just such an opportunity.

Do some ceremony around what you want to create with the energy supporting you now. Write out what you see working in the world and what your intention is to see created or built that serves us for the generations to come. Burn the paper in a black candle for Samhain. This New Moon is lit up intensely, so take a moment to put your energy towards what seeds you want to plant in this rich, dark, earthy soil. Join me for my FREE online New Moon Ceremonial Class by clicking here.

Look for the baby crescent Moon, right after sunset, in the dusky sky with Mercury tonight. This is an activation that follows nicely on yesterday’s New Moon. The Moon will have moved into Scorpio to meet Mercury in Scorpio, bringing our heads into the feeling realm, more into the Underworld theme of this season as we move towards the cross quarter of Samhain.

Mars is square Jupiter just hours later, so there’s an expansion of moving both the Divine Masculine and Aries into being the protector of our emerging Feminine power. Mercury is opposite Uranus in Taurus today, giving our minds a well needed rest within the sensations of the body.

Look for Mars in the later evening sky, just about 90 degrees from Jupiter, towards the east.

The Sun moves into Scorpio today, bringing the aspect of the Light into the deep feeling, shamanic, underworld healer that is Scorpio. This is the fall energy further moving towards the composting and healing that comes from honoring the Dark Goddess at Samhain.

The last quarter Moon squares Mars, Mercury, Uranus and gets close to the Big 3, thus more activation around these final months of doing our internal shadow work, hopefully shifting us away from what’s broken in our world. I keep seeing the overarching issue behind all the brokenness is patriarchy, for all of us whether we identify as male, female or beyond gender.

Mercury is hidden by being so close to the Sun, signifying being in the Underworld – see a theme developing here as we head into the fall holiday of Samhain or Halloween?

Both Mercury and Venus move into Libra. Our minds, our thinking and the Divine Feminine move into relationship centered Libra. Our thinking intent includes others. How do we know our thoughts through the mirror? Our feminine intent is on this reflection as well. How do we know our internal and collective feminine power? It could be through the reaction to the unconscious, unequal relationship within the patriarchal masculine, forcing us to see our true authentic girl power.

The Moon catches up to Chiron, the wounded healer, in Aries. This demonstrates more intent around healing the dysfunctional patriarchal aspects of Aries into the defender of equality, diversity and respect. Then the Moon quickly catches up to Mars in Aries, further illuminating what I just wrote.

It’s the Full Moon in Taurus on Halloween! And, Samhain starts at dusk. Ancient people saw the start of the day beginning at sunset, not sunrise, or midnight like we do. The start of the day was the darkness, the womb of that Dark Goddess preparing for the seed to grow into the birth of the light of the day, when the Sun rises.

Samhain is the holy day that signifies we’re half way between the fall equinox and the winter solstice. We’re moving into the dark days of the year, the quiet, the stillness. You can feel it. For the Celts, Samhain marks the start of the new year too. We move into the darkness, the cave of the life cycle, the underworld, where we compost the decay and the parts of ourselves no longer serving us.

This energy is supported by the Full Moon, the time we do ceremony to release what stands in our way of being best selves. It’s a time to grow beyond our limitations and more fully become who we authentically are. We visit the shadow, holding the hand of the Dark Goddess and die a shamanic death to what needs to be released. It’s a time to be held in the womb of the earth and feel what we deny and face what we keep hidden in the dark, so we can move towards the planting seeds in the still earth of winter, waiting to germinate over the darkness of winter.

The theme for this last half of October is similar to this whole year, in that we need to keep grounding and calming ourselves. Now, as we move towards this underworld and shadow work energy, I’ll suggest spiritual aromatherapy that supports both. I’m a big two birds with one stone kinda gal. Essences that support both grounding, calming and embracing our hidden emotional work are Black Pine or Black Spruce, as well as Vetiver or Patchouli. All four are grounding and calming and help us deal with stress. The black essences support our working within the shadows. Vetiver is steam distilled from roots that grow deeply into the ground. The roots are actually much longer than the grassy plant itself. Root essences are always good for diving into the caves of our psyches. Vetiver is also very supportive of your boundaries, so you don’t need to go farther than you are comfortable doing. Patchouli is a flowering shrub that helps us to purify ourselves and opens the door to self love, which is essential when doing our deeper, even scary work.

You choose whichever ones resonate with you. Always follow your intuition first, but a starting place would be to use them on your feet, your belly or lower back, or your heart, every day, with the intention of supporting you in doing your work in the Underworld. Ask the Dark Goddess, the energy of fall and Samhain to help you as well. You can shop for these and other essential oils by clicking here.